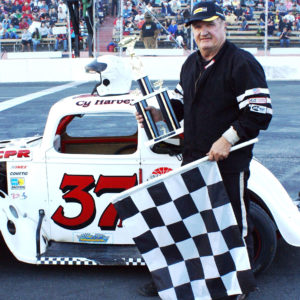 Cy Harvey started racing in 1969 at Halifax Dartmouth International Speedway, Sackville, NS, with a 1955 Cheville that he won in a poker game. He cut it up to make a stock car.

1980-‘85 he joined MASCAR and raced different tracks in the Maritimes.

1999 he won the Masters Nationals at Charlotte Speedway, NC driving a Legends Car.

2002 raced at Allendale Speedway in the USA winning the feature.

2003 Cy won the Canadian Championship at Berry Speedway in Ontario.