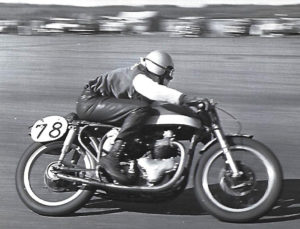 James competed from 1956 – 1969. He was a motorcycle racer, road racer, drag racer and a great Club supporter. He assisted many others in the motorcycle sport.

Here are some of the places he raced: Scoudouc, McEwens, Petitcodiac in New Brunswick; in Nova Scotia Wallace, Atlantic Park, Maitland, Debert; in Ontario Mosport.

James had many firsts. He was a great competitor.