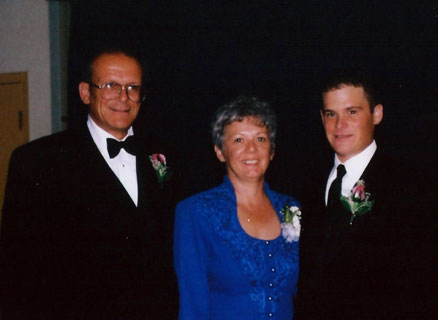 Ernie started as a scorer at the Riverside Speedway 250 in 1977.

1977-1979 he worked as a scorer at Riverside Speedway. He used a tape recorder to score the cars.

1984-’87 They started Maritime Raceway Services with Norman Thompson. Worked for Ernie McLean at Riverside Speedway, Ernie was race director, Cathy tape scoring and Mike in the tower manual lap scoring. They also started a newsletter to racers and fans throughout the Maritimes.

1994-’95 helped Jerry O’Leary with the construction of and the opening of New Brunswick International Speedway. Here Cathy moved to Assistant Flag person.

2001-2008 The Maritime Pro Stock Tour began, they became very involved. Still worked at Scotia Speedworld. Cathy until 2006 when she was diagnosed with cancer; Cathy passed away July 2007 and was inducted to the Maritime Motorsports Hall of Fame posthumously.