Management for the Maritime Motorsports Hall of Fame (MMHF) is excited to announce a new exhibit at its Museum. “Heart of a Champion”, a fully restored championship 1967 Chevelle stock car which contributed to the careers of two MMHF inductees, is now on display.

The car was first raced in the early 1970s by 2013 MMHF inductee Bob Yuille (Dartmouth, NS). Its second driver was Charlie Kane (Lakeside, NS) who sold it to Jim Sewart (Halifax, NS) in 1974; he won the ’74 sportsman championship at Atlantic Speedway with it. In 1976 Jim sold the car to his brother Greg Sewart, a 2010 MMHF Inductee) who claimed the Atlantic Speedway sportsman rookie and championship titles that year with it and then in 1977 successfully defended his sportsman title.

Greg soon moved on to late models and sold the car to Morris Clarke (Brookfield, NS) who raced a handful of times until 1980 when he retired from racing. The car sat in a barn until 1985 and then in a field until 2004 when it was recovered by two stock car racing enthusiasts. They got in touch with the Sewart brothers, who along with the restoration project coordinator Patrick Lawrence, reclaimed the car in 2010. The project sat on the side burner until April of this year when the Sewart’s, Lawrence, and many former crew members on the car gathered daily to bring it back to life. 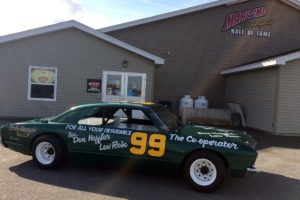 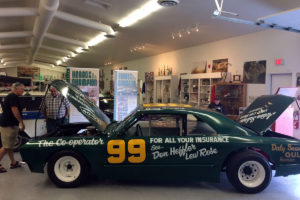 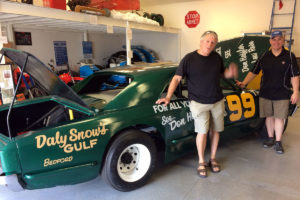 The now pristine fully restored vintage race car was unveiled mid-July at Riverside International Speedway as part of the IWK 250 Weekend and, with the help of Greg Sewart, has since visited other race tracks and car shows in Nova Scotia. Its one stop in New Brunswick cried for more, hence it now being at the MMHF Museum where it is expected to remain until early spring.

Heart of a Champion is believed to be the only fully restored vintage race car in Eastern Canada and among just a handful in Canada.

Dubbed Heart of a Champion, the project has helped raise awareness for the history of maritime motorsports and through memorabilia sales, funds and awareness for SPCA Nova Scotia. Its primary sponsor is Steele Mazda in Dartmouth who used it in conjunction with its ‘Family Matters’ campaign.

Numerous other sponsors helped with the project and are acknowledged at www.heartofachamp.ca.

The MMHF Museum is open Monday to Friday from 10 a.m. to 5 p.m. Admission is free for members and just $5.00 for all others.

While the MMHF staff are excited with this new display they are busy preparing for the 12th Annual Induction Gala on November 18 at the Loyalist Country Inn in Summerside, PE. Tickets are available until November 10 while supplies last using the new order and pay online form or by calling 506-756-2110. Ten new inductees will be honored at the event (details at www.mmhf.ca).

To learn more about Heart of a Champion please visit www.heartofachamp.ca.