Visitors to the Maritime Motorsports Hall of Fame (MMHF) over the next few months will have the opportunity to view the Hubley Bluenose Special race car, a 1938 custom-built open cockpit marvel which beat the best race cars from all over North America. 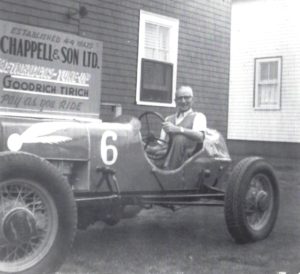 The car, believed to be the only mobile Canadian pre-war race car in existence, is named for its builders, Reginald “Reg” Hubley and his brother “Oz” with the body fabricated by their father, Milton, all of Halifax (NS). Reg raced the car at the Halifax Exhibition Grounds at speeds up to 100 mph

among a field of racers from Canada and the United States.

In 1938, 100 mph was incredible, especially considering it was attained in a car that was built on a bet.  Reg’s skills as a mechanic were challenged by friends who suggested he build a race car that could compete with the professionally built racers that made their way to Halifax each year for the annual car race held at the end of each season on the 1/2-mile horse track at the Exhibition Grounds.

Reg took the bet and designed the car, building it with parts from five different vehicles; its frame is iron reinforced full length by cedar 2×4’s, and the engine was a 490 Chevrolet block which was ground down and modified. The car has only one forward gear and included mechanical innovations such as a pressure feed fuel system which allowed the driver to hand-pump air pressure in the gasoline tank which kept a steady flow of gasoline into the carburetor.

The provenance of the car is well-documented. With the Second World War declared in 1939, auto racing was put on hold and so the Hubley was taking up valuable floor space in Reg’s shop. It was hoisted to the rafters where it stayed until after Reg’s passing in 1941. Reg’s father, Milton, kept it until 1957 when he gave it to Ted Jenkins of Woodside in Dartmouth (NS). After 19 years of inactivity, Mr. Jenkins got the car going with little more than new spark plugs and a few drops of oil. 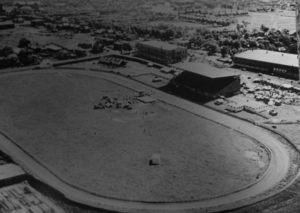 Eventually, the Hubley landed in Newfoundland in the possession of Reg’s nephew, Bob Murphy. In 1995, he put the car up for sale and it was bought by Dave Boone who had it transported to his home in Ottawa. Over time, Mr. Boone rebuilt the engine as well as painting and lettering it to reflect its Nova Scotia heritage. In 2009, Mr. Boone donated the car to Canada’s Museum of Science and Technology, from which it is currently on loan to the Maritime Motorsports Hall of Fame.

Management for the Maritime Motorsports Hall of Fame would like to extend heartfelt thanks to MMHF inductees Jim Hallahan and Ernie Ledwidge who donated their time and to Atlantic Tiltload for providing the means of transport in getting the Hubley to its temporary home in Petitcodiac.

The MMHF Museum is open Monday to Friday from 10 a.m. to 5 p.m. and, from June through September, on Saturday’s and Sunday’s from Noon to 5 p.m. Admission is free for members and only $5.00 for others.